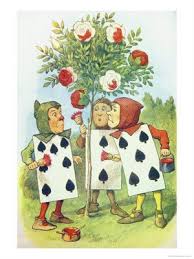 “What is the use of a book without pictures or conversation?”: it is necessary to point out that only when the two elements of the mix have equal dignity we can benefit from Wonderland DRINK ME. The reason for this is that, when the images prevail over the conversations, we run the risk of creating that subculture George Steiner talks about in a recent interview: “We are witnessing the destruction of language as overwhelmed by images, in particular the digital ones…we must know that 90% of the Americans talk using 380 English words, whereas in Shakespeare’s works we can find 24.000 words. Language is devoured by the obsessive minimalism of electronic codes, as it is shown by the ever more ‘compressed’ text messages teenagers send each other via cell-phones” [i]

On the other hand, if Steiner is right from a certain point of view, I take the liberty of suggesting him – as he is about to write an essay on Poetry and Philosophy – a comparison between the “compressed language” of adolescents and the poetic language of Carroll’s Jabberwocky. In both cases we observe the creation of a syncretic lexicon, based on those neologisms defined by Carroll as portmanteau words, derived from the combination of two common words, with incredible effects of amplification of the meaning of both the single term and the new expression in its whole.

This is a procedure that clearly goes back to Shakespeare (Harold Bloom, the great critic well-known for his devotion to the Bard, went so far as to state that “Lewis Carroll is Shakesperian to the degree that his writing has become a kind of Scripture for us” [ii], even though Carroll, in Wonderland in particular, tends to proceeds through synthesis whereas Shakespeare prefers the reduplication of words reflecting each other – and whose number is, obviously, higher in Through the Looking Glass). We can find many examples of such a play on the ambiguity of words in Hamlet. Here are just a few among the most famous ones:

In these cases, says Empson, “one of the two words would be enough to convey the meaning” [iii]. But through the reduplication, which is never uncalled-for, the meaning is every time enriched by echoes, allusions, cross-references to either other parts of the work or secret double meanings.

Frank Kermode has developed such an approach through the excellent analysis of Hamlet in his volume on Shakespeare’s language (published in Italy by Bompiani [iv]). He shows how the work is dominated by the obsession for the “reduplications of any kind”, in particular “by the use of the hendiadys. Literally, it means ‘one by means of two’ and can be illustrated through such expressions as law and order”. Furthermore, “the reduplication also influences Hamlet’s structure. There are couples of characters: Cornelius and Voltemand, two ambassadors uttering (on the whole) only ten words; and the indistinguishable Rosencrantz and Guildenstern. The theatre in the theatre is a disturbing double of Hamlet, as is the mime show of theatre itself. The role of the revenger is doubled (Laertes and Fortinbras)…” etc.: there are many examples that immediately evoke, to Carroll’s lovers, the couple Tweedledum and Tweedledee or the Leon and the Unicorn of Through the Looking Glass land, but also Wonderland portmanteau-characters, such as the Fish-Footman of Chapter Six or the flamingoes-mallets and the hedgehogs-balls of the croquet game in Chapter Eight (to these Disney’s film adds some new, though typical of Carroll’s imagination, bizarre animal-objects).

But, as Deleuze points out, the best example of Carroll’s passion for reduplication is the famous gardener’s song in Sylvie and Bruno [v]. Each line presents two very different words offering themselves to two different looks (“He looked again…”), so that the group of lines develops two heterogeneous series: the first one made up of animals and convenience goods, the second one made up of symbolical objects or characters. As we learn at the end, the song designates the story, the gardener’s very identity (which is complex, fragmentary and changeable as Alice’s):

He thought he saw an Elephant,

That practised on a fife:

A letter from his wife.

“At length I realise,” he said,

“The bitterness of Life!”

He thought he saw a Buffalo

“Unless you leave this house,” he said,

“I’ll send for the Police!”

He thought he saw a Rattlesnake

That questioned him in Greek:

The Middle of Next Week.

“The one thing I regret,” he said,

“Is that it cannot speak!”

He thought he saw a Banker’s Clerk

Descending from the bus:

“If this should stay to dine,” he said,

He thought he saw a Kangaroo

“Were I to swallow this,” he said,

He thought he saw a Coach-and-Four

That stood beside his bed:

A Bear without a Head.

It’s waiting to be fed!”

He thought he saw an Albatross

That fluttered round the lamp:

“You’d best be getting home,” he said:

“The nights are very damp!”

He thought he saw a Garden-Door

That opened with a key:

A double Rule of Three:

“And all its mystery,” he said,

He thought he saw an Argument

That proved he was the Pope

A Bar of Mottled Soap.

“A fact so dread,” he faintly said,

The gardener’s song  is, like Alice’s adventures, a play of mirrors. As it is Hamlet, within which each line, each character, each detail of the plot, continuously reflect one upon the other, doubling themselves; in his film version, K. Branagh sets most of the story in Elsinore Palace main hall, whose walls are covered with mirrors which will break only at the end, with the raid of Fortibras’ soldiers (to point out the return to reality after having “crossed the mirror” of stage fiction). Through such poetic means, Shakespeare’s “vision” results to be amplified, strengthened, reinforced.

It is not a case that Raymond Queneau devotes the second and third of his Exercises in style (the first two variations to the tale “Notation” [i][1]) to the illustration of the two approaches, both equal and opposite: the Shakespearean one, based on Reduplication (exercise ingeniously entitled “Double Entry” [ii][2]) and the Carrollian one based on Synthesis (“Litotes” [iii][3]). In this sense, we could set against/compare the two most famous works by Tom Stoppard: Rosencrantz and Guilderstern are dead (reduplication) and 15-Minute Hamlet (synthesis). We are talking about the same analogy Borges refers to when discussing Melville, world-famous for the epic conflict between Captain Ahab and the White Whale described in the immense novel Moby Dick. Less known is a short tale by the same author telling the enigmatic story of Bartleby the Scrivener. Apparently, these are very different works, with regard not only to their length but also to form, characters, contents: it is enough to say that one is set among the boundless scenery of the Ocean and the other among the restricted walls of a suffocating metropolitan office. Notwithstanding this, as Borges observes, “there is a secret and crucial affinity between the two fictions”. The same affinity to be found between Shakespeare’s reduplications and Carroll’s contractions. If considered from this perspective, Alice’s language results to be, once again, extraordinarily contemporary and rich in implications.

We don’t have to forget Baricco (Postmodern Alice 3): Alice is a ferocious and postmodern surfer of the “depth of surface”. Deleuze explains this as follows [iv][4]: “Alice’s beginning (the whole first part) is still searching for the secret of events…in the depth of the earth, in pits and dens…As the narration goes on, the movements of sinking and burial are replaced by side movements. The animals of the depths become secondary and are replaced by paper characters, devoid of any consistency. It is as if the depth had unfolded and become width… Deep is not a compliment anymore… The events are like crystals, they become and grow only for the edges, on the edges. In this we find the first secret of both the stammerer and the left-hander (of the barbarian, Baricco would say); it is not sinking, but sliding lenghtways (surfing in Baricco), so that the old depth becomes nothing, reduced to the surface’s reverse direction. Therefore, not Alice’s adventures but rather one adventure: her ascent to the surface, her disavowal of the false depth, her discovery that everything happens at the frontier. This is why Carroll renounces the first foreseen title: Alice’s Adventures under Ground. All this even more so for Through the Looking-Glass. Here the events are not searched for in the depths anymore, but to the surface, in the thin incorporeal vapour fled from the bodies, the inconsistent film surrounding them, the mirror reflecting them”. Here, at the frontier, where the surface is depth, reduplications are contractions and viceversa.

Where Steiner only sees the loss of identity caused by the passage from “a dominant culture to a post- or sub-culture”, we could distinguish the features of the acquisition of a new identity, thanks to the opening towards a dis-organization of the real resembling the room Through the Looking-Glass, in which Alice, once entered, immediately notices: “They don’t keep this room so tidy as the other”. That is to say, an identity that is not monolithic and determined by the Experts of the Unique Thought of Solid Modernity anymore, but Liquid, Multiple and Changeable, also created by the bottom interactions of all the participants to the social discourse (“social networking”).

[1] In the S bus in the rush hour. A chap of about 26, felt hat with a cord instead of a ribbon, neck too long, as if someone’s been having a tug-of-war with it. People getting off. The chap in question gets annoyed with one of the men standing next to him. He accuses him of jostling him every time anyone goes past. A snivelling tone which is meant to be aggressive. When he sees a vacant seat he throws himself on to it. Two hours later. I met him in the Cour de Rome, in front of the gare Saint-Lazare. He’s with a friend who’s saying: “You ought to get an extra button put on your overcoat”. He shows him where (at the lapels) and why.

[2] Towards the middle of the day and at midday I happened to be on and got on to the platform and the balcony at the back on an S-line and of a Controscarpe-Champerret bus and passenger transport vehicle which was packed and to all intents and purposes full. I saw and noticed a young man and an old adolescent who was rather ridiculous and pretty grotesque: thin neck and skinny windpipe, string and cord round his hat and tile. After a scrimmage and scuffle he says and states in a lachrymose and snivelling voice and tone that his neighbour and fellow-traveller is deliberately trying and doing his utmost to push him and obtrude himself on him every time anyone gets off and makes an exit. This having been declared and having spoken he rushes headlong and wends his way towards a vacant and a free place and seat. Two hours after and a-hundred-and-twenty minutes later, I meet him and see him again in the Cour de Rome and in front of the gare Saint-Lazare. He is with and in the company of a friend and pal who is advising and urging him to have a button and vegetable ivory disc added and sewn on to his overcoat and mantle.

[3] Some of us were travelling together. A young man, who didn’t look very intelligent, spoke to the man next to him for a few moments, then he went and sat down. Two hours later I met him again; he was with a friend and was talking about clothes.