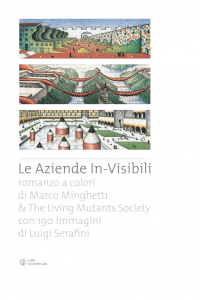 In the October 2008,  Libri Scheiwllier  published a romance, “Le Aziende In-Visibili” (The In-Visible Corporation), inspired by the famous Italo Calvino’s “Invisible Cities” . Le Aziende In-Visibili is a collective narrative reflection about the contemporary life in an age of enormous socio-technical trasformations. In this context the Corporation became metaphor of the nowadays human condition (as the Cities in the Calvino’s Masterpiece). The romance is illustrated by 190 images by the great artist Luigi Serafini.

The romance has found a first “translation” in the NOVA 100 blog-network, created by Sole 24 Ore, the most important European economical newspaper