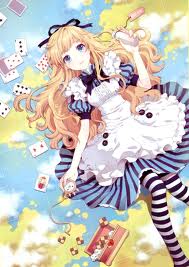 What is the use of a book without pictures or conversation? It is a summer’s day and on a riverbank seated beside her elder sister that Alice poses this question. The river is a traditional metaphor to express change and this book, like its sequel, is steeped in the waters of a mutation whose sources can be traced back to aspects of significant western thought. The waves of wonderland are the same as those on which the Snark hunters sail (they derive, as it happens, from the mythical Jabberwocky). In keeping with Carroll’s topsy-turvy logic, these marine creatures are the offspring of a winged dragon, and the sequence of Darwinian evolution is thereby inverted (1). These waves wash the shores of Utopia (and those Plato’s Republic). We find ourselves firmly placed in the mainstream of the Anglo Saxon tradition of education, for which Knowledge can be, and indeed should be, translated into practice.

In modern times, the starting point for this tradition is obviously Robinson Crusoe and throughout the nineteenth century there was a vogue for books in which men, boys or young children, learned to face an unknown, even hostile, environment.

Celati (with reference to Dickens) relates this narrative genre to the then widespread employment of child labour [ii] which in our day, in the age of globalization, is still to be found in Developing Countries, where it repeats a pattern earlier experimented in the England of the Industrial revolution.

The majority of these works adopt an optimistic and idyllic approach and promulgate values of a self-sufficiency which involve subjugating the environment. Robinson Crusoe is the forerunner, and the books that follow offer the reader examples of group cooperation. A good example is The Coral Island. A tale of the Pacific Ocean by R.M. Ballantyne. Meddemmen [iii] reminds us that W. Golding, a century later, would reverse this attitude in his well-known  The Lord of Flies. Such reversal is anticipated by Alice. Carroll’s book describes the formation of an individual, but the main character of is a girl, not a boy. In the world she experiences, all the rules – including the laws of physics – are turned upside-down. Wonderland is envisaged as a mobile head-down environment (“How funny it’ll seem to come out among the people that walk with their heads downward! The Antipathies, I think”, she ponders as she falls, talking to herself the while). From the outset, she learns that the impossible is in reality perfectly possible As the Nobel Prize Wislawa Szymborska puts it: “You see, so many out-of-the-way things had happened lately, that Alice had begun to think that very few things indeed were really impossible”. An instance of such possibilities is the social context, here dominated by women (the Red Queen, the Duchess, Alice herself…), a context in which male figures are subordinate (the King, the White Rabbit) or mutants ( the Cheshire Cat, the Caterpillar). Some of them are even, quite literally, out of their minds (for example, the Mad Hatter, treated by Carroll with sublime irony).

What kind of child is our post-modern Alice? Raffaele Simone maintains that the process of “child creation” that began in the nineteenth century “reached its peak between the sixties and the eighties in the twentieth, with the psychology of development and education (Dewey, Piagete and Bruner), with theologies of liberation, the Montessori open pedagogies system and “liberal” paediatrics (in the style of Benjamin Spock; if anyone still remembers him). Furthermore, psychoanalysis has progressively placed the child as an independent person at the centre of the scene, a child who is no longer to be treated as a small scale adult but as a individual with his own dynamics, forms of intelligence, emotions, sufferings and rights”.

Nonetheless, Simone continues, this phase was destined to be short-lived and to be followed  by the arrival of the “global child”, for whom premature and bare-faced emulation of adults is one of its most unsettling features. Other aspects are an overwhelming consumerism and polemical attitudes which challenge adults (adults and seniors indeed become object of mockery). To this should be added a relative indifference to the common good and widespread anticipation (in boys) of their first experience of sex and of drugs; attention has now shifted from the school to the world outside. At a later stage, when the “child” turns into a ‘youngster’, these tendencies increasingly come to the fore.

In a certain sense, though from a different standpoint, we are now faced with recurrences which alreary characterized aspects of the pre-modern era. Then the child was regarded a little adult to be exploited, nowadays he is once again seen in the same light; but there is a difference: he is now seem as a protagonist, a self-centered consumer (with his parents aiding and abbetting). In other words, the era in which the western child was treated as real child was short-lived, a flash in the pan which lasted from the eighteen-seventies to the end of  the following century. [iv}

This analysis, typical as it is, deals with the matter in a way which might well bring to mind the Italian comic movie “Toto’, Fabrizi and Modern Youth”, for it completely ignores the arrival on the scene of Web 2.0. This has spawned what Barricco describes as Digital Barbarians. Who exactly, swe might ask, are these youngsters who were born and have grown up in the shadow of the internet revolution?  Serena Danna has posted an excellent sunmming-up in her Il regno dei Nativi Digitali. [v] “They have been dealing with interactive screens since birth, and they see internet as the prime tool for research and for the sharing and processing of information” in the words of Paolo Ferri, professor of Education technology,  theories and technique of new media at the Bicocca University of Milan. This is a new generation, those who are now under-twelve years of age, the age – be it said – of Alice herself. Fully high-tech, they think, learn and know differently from their older brothers. “ If for us learning meant read-study-repeat, for children who have grown up with video-games learning means, first and foremost, solving problems actively”: So says Ferri, a schlar who has for some years now has championed “digital learning” systems. Young people who have grown up with keyboards and cell phones “are used to seeing the solution of cognitive tasks as a pragmatic problem” adds Lynn Clark director of Estlow International Center for Journalism and New Media at Denver University (US). She has carried out a research project based on 300 American families, in order to understand their involvement with digital media. “Thanks to videogames, children’s knowledge is nurtured by symbols, challenges and ever changing models of narrative” maintains Clark. Without doubt, she would have met with Lewis Carroll’s approval, since he was himself a tireless creator of games destined to teach children mathematics and logic; games based on narration, graphics and their interaction. “If something can be seen, heard, played, why should it be told in words?” asks Paolo Ferri. This is precisely what Alice asks herself.

"Error 403: Your IP is being rate limited by Twitter." — marcominghetti